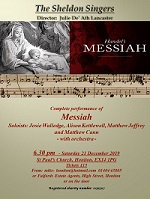 There are many people for whom Christmas wouldn’t be Christmas without hearing Handel’s Messiah, and I am one of them. I was lucky enough to be amongst the large audience in St Paul’s Honiton on 21st December for a performance by The Sheldon Singers, with four excellent soloists and a full orchestra. Unusually for an amateur choir, the decision (a brave one) had been taken to perform the work in its entirety. Singing Messiah with small forces is not easy – the choir (only 28 singers) and the compact orchestra are very exposed – but as it turned out, they were right not to be daunted. If your previous experience of Messiah has been limited to the large scale, Huddersfield Choral Society-type offering, then I recommend you seek out a performance such as we heard at St Paul’s, and which is in fact what Handel intended.

The Healing Power of Music. Amongst the parades and poppies in this 100th anniversary year of the Armistice, communities have been coming together all over the country to mark the act of remembrance through music. St Paul's Honiton was no exception on Sunday 11 November, as the Sheldon Singers gave a performance in aid of military welfare charity The Baton. For those in the full church pews that evening, we shared a memorable and compassionate testimony to those who served, those who lost their lives, and those left behind. www.thebaton.co.uk

A Feast of Carols

Sheldon Singers gave their audience at St Paul’s Church Honiton a real carolling feast on 22nd December. The concert showed off the versatility of the choir and also gave a rare opportunity to hear the harp played as a solo instrument.

There should be more concerts like this one – an hour of delightful and varied music performed by the Sheldon Singers under the direction of Julie De’Ath Lancaster, in the elegant surroundings of the Music Room at Sidholme. The choir took us on a magical musical tour from the sixteenth to the twentieth centuries, beginning with ‘Pastime with good company’.

'The Sheldon Singers Christmas concert at St Paul’s Church Honiton began with a resounding opening of “O Come all Ye Faithful” for choir and audience, heralded by The Brass Warriors Quintet - and set the tone for the evening.

The contrast between traditional carols and not so well known ones was wonderful. The moving and sensitive rendition by the choir of James Macmillan's “O Radiant Dawn” and Will Todd's “My Lord Has Come” were highlights.

Those lucky enough to have heard The Sheldon Singers’ 30th Anniversary Concert last Saturday will surely agree that it was an absolutely outstanding occasion. The centrepiece was a riveting performance of The Armed Man: a Mass for Peace – Sir Karl Jenkins’ dramatic commentary on the savagery of war and the alternative pathway of peace. With current events across our unstable world, this intensely moving music makes a profound emotional impact, similar to Britten’s War Requiem 50 years ago.

First performed in 2000 as part of the Millennium celebrations, and specifically for the relocation of the Armouries Museum to Leeds, The Armed Man calls for a full symphony orchestra, chorus and soloists, including a Muezzin to sing the Muslim Call to Prayer. For the Sheldon Concert Julie De’Ath Lancaster used a pared-down orchestra of strings, flute/piccolo, 3 trumpets, percussion and organ.

Sounds of the Spirit

Quiet thought and contemplation should invest the character of music for Good Friday. The programme chosen by the Sheldon Singers for their Good Friday concert in St Paul’s Church in Honiton perfectly reflected that mood.

Thank you all so very much for such a splendid concert .......thanks to Mike Gent especially for organising the food, greeting, chairs and piano ....but not the weather. Julie

On Tour in Prague

Link to YOUTUBE - TV broadcast 28.9.15 The Sheldon Singers in Prague

The Sheldon Singers returned to St Paul’s Church Honiton on Saturday with a varied programme tied together with unifying motifs. The first part of the evening consisted of a selection of unaccompanied songs for the choir, on the theme of birdsong, ranging from a 15th century nonsense song (in French!), via madrigals, to the more familiar Cornish folk song which most people know as “Down in those valleys below”, arranged for solo baritone – Peter Smith from the Choir - and chorus.

On Saturday 20th December Honiton’s Sheldon Singers performed their Christmas Concert at The Beehive Centre for the first time. The format was rather different from their usual Christmas offering in that appropriate readings were inserted into the programme, which made the evening even more enjoyable.

The Sheldon Singers’ gave the appreciative audience at St Paul’s Church on Saturday, 27 April an eclectic mix of pieces from composers both traditional and contemporary.  Huge choral anthems, such as ‘Zadok the Priest’ and gentler items, including Purcell’s ‘Bid the Virtues’ for soprano solo and oboe, sat alongside each other in the first half of the programme. As Director of Music Julie De’Ath Lancaster pointed out in her introduction, “it’s not often that you hear Mahler and Strauss in the same programme, followed after the interval by a relatively new work by the composer Bob Chilcott, a former member of the King’s Singers”. But what a musical feast we had!

On the evening of Remembrance Sunday St Paul’s Church Honiton was the venue for a concert of specially relevant music -  two Requiems, performed by two local choirs. Both these Requiems, whilst owing a great deal to the traditional form, are very different to what we usually hear, and indeed different from each other.

Messiah is often done at Christmas, but not always in its entirety. Sheldon Singers, under the stylish direction of Julie De'Ath Lancaster, gave us the complete work at their recent concert, and what a treat it was. Smallish forces in chorus and orchestra created an authentic baroque sound, just as – the programme note pointed out – Handel would have expected to hear.

From the start, with well-judged tempi and dynamics in the opening Sinfony, it was clear that this was not a large-scale free-for-all but a chamber performance of charm and poise. The chorus, who are the backbone of this piece, after all, produced some lovely sound, nimble in the 'runny bits' although occasionally lacking in attack. The men especially were inclined to lose volume in the faster passages. However, the dramatic choruses in part 2 were handled confidently, and the Hallelujah chorus was magnificent.